Saltar al contenido
Smoky Quartz (also known as gray quartz stone) is a variety of quartz from light brown to black. These colors are due to radiation emitted by radioactive minerals or the presence of organic matter.

In ancient times, it was thought that this quartz variant contained smoke in its interior hence its name.

For centuries it was one of the most carved and sought-after gemstones. It is known as the stone of concretion. 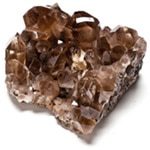 Smoky Quartz Crystal presents translucent brown color and hardness of 7 Mohs, being perfect for use in jewelry.

Due to the form of growth of its crystals, it is natural the variation of intensity of brown color and presence of inclusions and cleavages inside the yolk.

It is important to note that the shade should pull towards brown, as the shades of gray (white and black) indicate whether it is synthetic stone.

The light brown Quartz will have the same performances of the black Tourmaline, that is to say, protection, concretion, opening of ways and material conquests in our life.

Its main function is that of concretion. This is to say that it must always be used when we want to realize in fact an objective and to be able to be coupled to the stone in question.

It is also excellent for keeping our feet on the ground, because it makes us deal realistically with the circumstances that surround us, which makes it possible for us to walk more smoothly, because we are not involved in deception and illusions.

This ranges from the acceptance of my physical image, which is one of the ways I 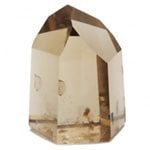 relate to the world (for example, “if I’m fat, I’m not going to bother with this issue, I’m going to live with it, act accordingly and get the best results from my relationship with the world as fat“), to cases that the person “loses his way“, such as depression, mental confusion, excessive use of drinks and drugs, diseases that do not end anymore.

It gives the person a sense of security and a sense of rooting, of which they know where they are stepping.

It gives the feeling of support. It fights fears, nightmares. It increases the will to live.

There are often inclusions of asbestos, chlorite, tourmaline.

Maybe you are wondering “¿what is smoky quartz for?”, The brown quartz is widely used in meditations, allows penetration into dark areas bringing light and love. 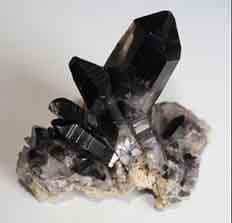 Smoky quartz stone is associated with the navel chakra and is one of the most powerful crystals, also helping to stimulate and purify energies.

This type can be found in several qualities of crystal, but those of white quartz and smoked those that can bring greater energetic force, for being considered universal.

Considered to be the brightest of all the dark stones, it transforms the spiritual energy of the body into healing power when it is placed on the root chakra.

Quartz can be used in the basic chakra, the first, it blocks our body against the entry of negative energies, bringing balance to the emotions, giving protection, teaches the path of light, when you are inside the darkness.

It gives us the strength to walk when there is the fear of erring, bringing the will to learn, and also to recognize our mistakes.

It is also linked to sexual forces, increasing our fertility.

Advice
As this is a delicate subject, it is ALWAYS recommended that any therapy you perform with this stone or any other be supervised by a health professional who can advise you at all times and give you the precise indications.

Crystal Grey Quartz is one of the most efficient stones for landing energies. At the same time, it helps to raise vibrations during meditation, this protective stone has a strong connection with the Earth and the base chakras, so it promotes concern with the environment and ecological solutions.

This stone is an unbeatable antidote against stress. By alternating spiritual energy and gently neutralizing negative vibrations, that crystal facilitates detoxification at all levels. 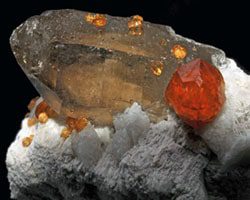 The smoky quartz mineral teaches us to leave behind anything that no longer serves us. From a psychological point of view, smoke quartz relieves fear and depression and promotes calm.

This crystal helps us in the acceptance of the physical body and sexual nature, increasing virility and purifying the base chakra, so that sexual energy can flow naturally.

It fights nightmares and helps in the manifestation of dreams. When it comes into contact with negative energies, it tends to dissolve them gently; from a mental point of view, dark grey quartz promotes positive and pragmatic thinking; it eliminates contradictions, promotes concentration and decreases communication problems; from a physical point of view, because it has often suffered natural radiation, this crystal is excellent for treating illnesses related to radiation or chemotherapy; quartz smoke is particularly effective for combating illnesses in the abdomen, hips and legs.

It relieves pain, including headaches, and benefits the reproductive system, muscles, nerves, and heart. This smoky crystal relieves cramps, strengthens the back, and fortifies nerves.

This smoky stone also helps in the assimilation of minerals and prevents the retention of liquids. it is attributed to them: good luck, will to live, aura cleansing, strengthening of friendship, improvement of sexual functions, health of muscles, bones, kidneys, pancreas, heart and stomach.

The mineral smoky quartz stones were known in ancient peoples as Mountain Crystals. The ancient Greeks believed that these stones were crystals of the mountains already matured, the Romans used it as a mourning stone that in spite of the pains, provided new courage and a new will to live, the Arab peoples honored the healing crystal quartz as a stone of fidelity and friendship, which changed color in the face of threats of misfortune. It was also honored as a fertility stone.

Effects of smoky quartz for the body

Strengthens the muscular system of the joints and bones and prevents discomfort from muscles, internal organs such as the heart and stomach.

It prevents the discomfort of the interior part of the body, the kidneys and the pancreas. has a clean and regenerating action that supports the kidneys. smokey quartz stimulates sexuality and protects the sexual organs against loosening.

Effects of smoky quartz for the mind.

brings people who are sad the joy of living and light to their lives. People who often think of suicide, because they are no longer reconciled with life, should always use a stream of smoky quartz.

It provides new strength and willingness to live, making the person perceive that life has much to offer. It’s appropriate for meditation, as it’s especially cleansing for the aura. 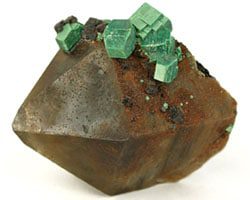 How to cleanse smoky quartz

The cleaning of this quartz is quite simple, you must place the stone in a glass container and add enough sea salt on it and then leave it for about 24 hours. After this remove the salt with the help of tap water.

To activate the grey quartz crystal leave it exposed all night in the light of the full moon.

And you have or have you had any experience with some smoky quartz?